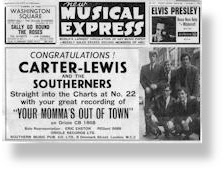 The chart run-down for that week also
recording the historic chart entry
at no. 22. 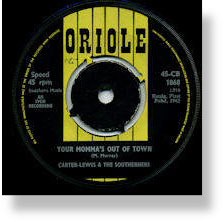 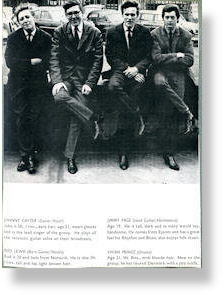 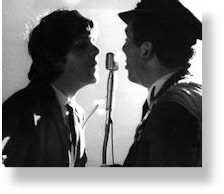 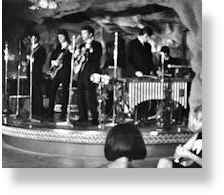 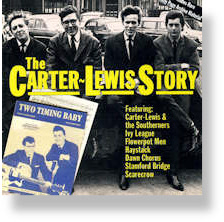 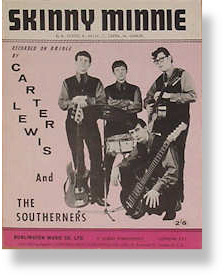 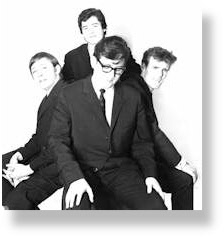 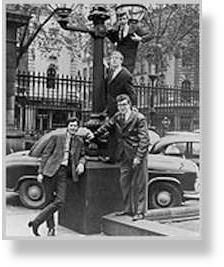 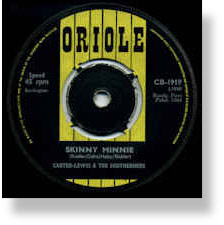 By the end of autumn 1963, after responding to an advertisement in Melody Maker, Rod had taken up position in
Carter-Lewis & The Southerners alongside John Carter and Ken Lewis, the start of a long association with the
highly talented songwriting team.   The band is also immortalised in rock annals due to a certain guitarist by the name of
James Page, well on his way to superstardom, though some years before Led Zeppelin took flight.

The band already had a long history of recordings, including several for Joe Meek, a number of 45’s issued on the Oriole label gave Rod his first taste of a professional recording studio.

With increasing interest from the record-buying public, it was
inevitable that demand for live performances would  follow.
Unfortunately, Ken’s interest was more geared towards writing
and recording than the pressures of the road, so, in order to

fulfil the demand for Carter-Lewis,  it was decided that Rod would
assume the Lewis surname, the public non-the-wiser!

Playing the ‘Mecca’ circuit, the majority
of numbers were covers of current
chart hits, interspersed with their own
material.

An excellent Carter-Lewis compilation
CD was issued on Sequel Records in 1993,
containing all of Rod’s tracks with the band,
plus excellent tracks by The Ivy League
and The Flowerpot Men etc..

Moving on to January 1966 and Rod was now performing at the Cliffs Pavilion, Southend as a member of the Monotones (not to be confused with the band that recorded The Book Of Love). Accompanying Rod were Jim Eaton (rhythm / vocals), Brian Alexander (gtr), Brian Edgings (drums) and sometimes guesting on vocals was Mark Loyd.

Playing at Tiffany’s, Wimbledon,  the band was ‘required’ to undergo a name-change, to appeal to the sophisticated clientele, so, the Monotones were now known as Les Garcons, amazingly the subject of a BBC TV Mastermind question featuring the Moody Blues as specialist subject, and shown here performing at Tiffany’s with Mark Loyd on vibes.